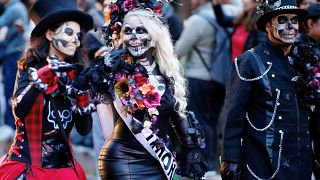 Day of the Dead and ‘French Spider-Man’: No Comment of the week

Revellers in Mexico City dressed up as skeletons on Sunday for a pre-Day of the Dead parade. The event took place days before the actual Day of the Dead, a pre-Hispanic tradition in which families remember their dead and celebrate the continuity of life.

In southeast England, families got into the Halloween spirit on Monday at a pick-your-own pumpkin patch. The 22-acre site in Kent boasts over 70 varieties of pumpkin.

In New York, a pizza pop-up museum opened, with exhibits including a room of fake melted cheese and a pizza parlour. "The Museum of Pizza is a place to celebrate knowledge, discovery and pop culture around the world of pizza," the museum's founder, Kareem Rahma, said.

A daredevil known as the “French Spider-Man” on Thursday attempted to scale the Salesforce Tower in London. Alain Robert’s climb up the 202-metre building sparked a major police operation, and he was arrested on a public nuisance charge.