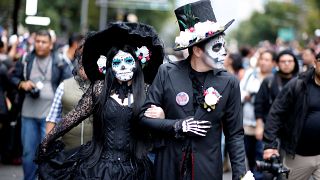 Skeletons run amok warming up for Mexico's 'Day of the Dead'

Mexicans threw a macabre party on Sunday (October 21), disguising themselves as the iconic Mexican skeleton figure known as "La Catrina" or "Elegant Skull" and flooded the streets for a pre-Day of the Dead parade.

The Catrina was created by Jose Guadalupe Posada (1852-1913), a Mexican cartoonist illustrator and artist whose work has influenced many Latin American artists and cartoonists because of its satirical acuteness and political engagement.

The parade took place days before the Day of the Dead, a pre-Hispanic tradition in which families remember their dead and celebrate the continuity of life. Mexicans set up offerings to the dead which include photographs, food, candles, flowers, personal items, skulls made out of sugar and skeletons of Papier mâché.

The November 2 "Dia de Muertos" or All Souls' Day interweaves Spanish influences with indigenous ancestor worship in South America, especially in places with strong indigenous populations such as in Mexico, Guatemala, Peru, Bolivia and Ecuador.