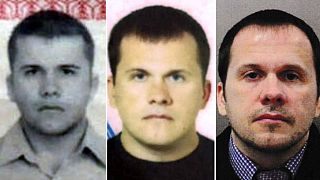 An investigative website has named one of the suspects in the poisoning of ex-spy Sergei Skripal in Salisbury as a Russian intelligence officer who was once awarded a military honour by Vladimir Putin.

According to a new report from Bellingcat, Dr Alexander Mishkin is a GRU agent, and received the Hero of the Russian Federation award in 2014 for his service during Ukraine's civil war.

Border crossing data obtained by the site indicates he travelled to Ukraine on multiple occasions between 2010 and 2013, using his alias Alexander Petrov.

Investigators from the UK-based site claim to have identified Mishkin by interviewing residents in his home town of Logya - one of whom provided them with a scanned copy of his passport, dated 2001.

They obtained forensic facial analysis of the passport photograph, and of an image from a second document from 2016, and concluded they were of the same individual.

Roman Dobrokhotov, an investigative reporter who worked with Bellingcat, described Dr Mishkin as "a very typical GRU guy", who grew up in an impoverished province of Russia before graduating from a top military academy.

Mr Dobrokhotov claims the information was "open and easy to access for anybody - even for two journalists with laptops".

Dr Mishkin allegedly travelled to the UK under the name Alexander Petrov, along with another man using the alias Ruslan Boshirov, in March this year.

British police say the two GRU agents used the Soviet-made nerve agent novichock to poison ex-spy Mr Skripal and his daughter Yulia in the city of Salisbury, in southern England.

Mr Skripal and his 33-year-old daughter both spent several weeks in intensive care at Salisbury District Hospital, but both made a full recovery.

The Skripals' poisoning sparked a diplomatic crisis in which hundreds of envoys were expelled by both Russia and Western nations.

UK Prime Minister Theresa May has said she believes the attack was approved at the highest levels of the Russian government, in retribution for Mr Skripal's ongoing work with European intelligence agencies.

The Kremlin has repeatedly denied any involvement, and issued no comment in response to Bellingcat’s latest claims.