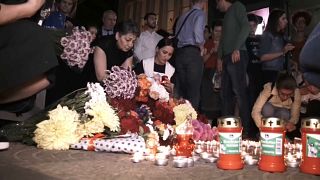 Charles Aznavour was honored in Hollywood on Monday (1 October), with flowers and a wreath placed on his Walk of Fame Star.

Meanwhile in Armenia's capital Yerevan, people brought flowers and lit candles around the star opened in honour of the singer and composer.

Charles Aznavour, the French-Armenian crooner and actor whose performing career spanned eight decades and who endeared himself to fans around the world with his versatile tenor, lush lyrics and kinetic stage presence, died Monday. He was 94.