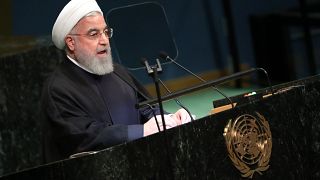 UN General Assembly begins amid tensions between US and Iran

Last year it was North Korea, this year Iran may be in the US President's crosshairs at the UN General Assembly. Both American President Donald Trump and Iranian President Hassan Rouhani will address the UN General Assembly today, but it's unlikely that they'll meet. Even so, they're in the same building while a war of words between the two is escalating- this time last year, Trump stood at his very first UNGA podium and threatened to "totally destroy" North Korea.

It was a shock on many different levels- the threats made in a house of diplomacy, the talk of sovereignty in a house of cooperation. Trump's first UNGA address will always be remembered for all the ways in which it was different. But back then, it was difficult to imagine that Trump would go from calling Kim Jong-un "little rocket man," on the world stage to “very open and terrific” just this week as he spoke about a second summit meeting with the North Korean leader.

It's Trump-style diplomacy that just goes to show that a leader can be his enemy one year, and his friend the next. But a similar outcome for the current US-Iran spat may be difficult. Rouhani himself refuted the idea in an interview with NBC's Lester Holt in the run-up to the UNGA.

"The North Korean model cannot be a correct model because we cannot draw such comparisons. But certainly there are different models out there that can be used, parts of which can be used in order to decrease tensions between Iran and the United States. This is in the hands of the Trump administration for it to cease its threatening behavior towards Iran."

Though Trump has indicated that he would meet with the Iranian president, Rouhani has refused.

"There is no such program for a meeting," said Rouhani. "Mr. Trump did not create conditions necessary to bring about the atmosphere conducive to a meeting."

"Naturally if someone is keen on having a meeting, and holding dialogue, and creating progress in relationships, that person would not use the tool of sanctions and threats when a government brings to bear all of its power against another government and nation. That means that the necessary willpower is absent in order to resolve outstanding issues."

Willpower is not lacking when it comes to the EU- though the Iran nuclear deal was ripped up by Donald Trump in the US in May, the EU is still pushing to hold it together. EU foreign minister Federica Mogherini spoke to press this morning indicating the bloc would be trying to keep trade open with Iran against all odds.

“Participants underlined the determination to protect the freedom of their economic operators to pursue legitimate business with Iran in full accordance with UN Security Council resolution 2231,” she said.

Of course, there are other pressing issues that will be discussed at the General Assembly, including potential solutions to the conflicts in Syria and Yemen. Despite a lack of progress on both of those issues, said founder of the Independent Diplomat Carne Ross, the UN is still a vital institution.

"Absolutely, we still need it," he told Good Morning Europe on Tuesday. "Its original purpose was to manage great power, tensions to stop the great powers from going to war with each other. And in that sense it works- I mean this is a place where Russia, China, the Americans and others of course still talk to one another- and they talk to one another a lot, about a lot of different places. Sometimes those conversations are confrontational and adversarial, but often they're collaborative and cooperative. Even if we don't see progress about some of the big issues, the most bloody, deadly conflicts in front of us- that does not mean that the institution doesn't matter. It has not enjoyed the heyday that it enjoyed perhaps in the late 90s and early part of the 21st century however."