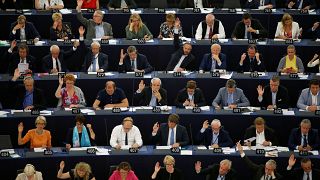 The European Parliament has voted in favour of a controversial law on copyright intended to update the laws for the digital age- but critics are saying it could be a catastophe for the internet as we now know it. The controversial articles within the law are 11 and 13- article 13 may threaten the spread of things like memes online, as they often use images without proper copyright. The law states that technology platforms must filter the things people post on them, and check for copyright infringement- in addition to fears about blocking the flow of content, it introduces concerns about online surveillance.

Guillermo Beltra, the director of legal and economic affairs for the European Consumer Organization says it brings in an unneccessary level of surveillance.

"We think it is quite a disaster for the internet if this proposal of law goes through to the end," Beltra told Good Morning Europe on Thursday. "Because it is very one sided- the goal of this law is to ensure a fair share of the revenue between the creators of the content and the transmission channels. And we share that goal- that is a very applaudable goal."

"What we do not share is the means to achieve that goal. The problem is that this law would change a fundamental principle of the internet, which is that when you upload something onto a platform, when you upload content, the platform if it doesn't know that the content is infringing any laws it is not responsible for that content. This law would change that. It would make any platform responsible for anything that is uploaded onto it, and the natural consequence of that platforms will start scanning and filtering everything that we upload. Now that naturally is very bad news for consumers, because any young musician that wants to remix and do his own creation, is getting into the world of DJing, and wants to upload his content, get new fans and learn more and get his creations out there will have a harder time, because the platforms will not be able to distinguish easily what is legal and what is illegal."

Sir Paul McCartney wrote a letter to lawmakers urging them to pass the law. He was particularly concerned with the lack of compensation for artists from streaming sites.

“The value gap jeopardises the music ecosystem. We need an internet that is fair and sustainable for all,” he wrote. “But today some User Upload Content platforms refuse to compensate artists and all music creators fairly for their work, while they exploit it for their own profit. The value gap is that gulf between the value these platforms derive from music and the value they pay creators.”

On the other hand, musician Wyclef Jean was in the European Parliament to fight against the law before the vote. He explained that the platforms McCartney criticised actually offer artists a unique platform to build their brand.

"I own some of the biggest copyrights in the world and I'm telling any kid right here: I don't want a filter for you, if you want to play the Wyclef Jean music," he said before the vote. "So this is how I'm going to discover the next artist. So as a producer, back home, all the producers, the way they going to discover artists is through these platforms. A lot of these kids now are being discovered from these platforms, from doing other people's material, so it's very important now we understand that."

The law will be put to a final vote in January, but it's widely expected to pass. From there, each EU country will need to decide how they'll enforce the law in their own country.