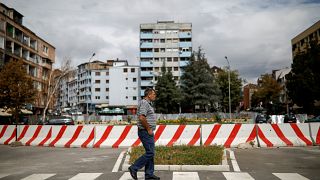 The territory exchange could potentially end a 10-year stalemate between the two countries.

Serbia could maintain control over northern Kosovo, in exchange for the Presevo Valley - an area populated by ethnic Albanians in Serbia's south.

Sir Ivor Roberts, former UK Ambassador to Yugoslavia said that this meeting could 'bring an end to this dismal saga,'

"The territorial aspect just makes sense from the point of view of Serbs living in the north of Kosovo, who are deeply unhappy there and Albanians living in Southern Serbia, who feel the same about being trapped in Presevo Valley," he said.

Kosovo is recognised by more than 100 nations - but not by Serbia. If they do agree on the land-swap proposal, that could also change.

"In a wider context that would lift the veto that currently stops Kosovo from being a full member of the international community," Rogers said.

However, some countries are worried about destabilisation.

"I wouldn't disagree that this is less than perfect, but the international community must think back to its original arguments in favour of border-changes, in which it said that if they are by mutual consent, then they should be allowed," said Rogers.