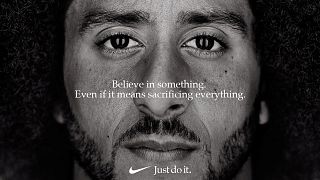 Colin Kaepernick has not played professional football in over a year, but his face is now on screens all around the world. Nike released a new ad campaign yesterday that features the former San Francisco 49ers quarterback. "Believe in something, even if it means sacrificing everything," says the ad over a closeup of Kaepernick's face. Kaepernick has been an unsigned free agent since he opted out of his contract in 2017, following his choice to protest police brutality and shootings of black men in America by police officers.

But plenty of Americans would rather "Just Burn It" than "Just Do It." A boycott campaign has started and people are taking to social media to showcase their destroyed Nike gear. Nike shares dropped three percent yesterday as the so-called Divided States of America took sides once again, but the choice to showcase such a controversial figure might not be as risky as it appears. According to CEO of Leagas Delaney Advertising Agency Fergus Hay, it simply shows continuity in Nike's branding strategy.

"All of the data shows that the youth market globally, but particularly in America, want their global superbrands to have a point of view," said Hay. "And Nike have done this since their inception in the 1970s, their brand has been built on American values- American values of progression, achievement, self-expression and individuality. So this isn't really a campaign, it's a continuation of their brand equity for forty years plus. Nike have chosen to take a knee with the youth generation of America, rather than put their hands on their hearts for Trump's version of America."

Kaepernick's #TakeaKnee movement started in 2016. "I am not going to stand up to show pride in a flag for a country that oppresses black people and people of color," said Kaepernick at the time. "To me, this is bigger than football and it would be selfish on my part to look the other way. There are bodies in the street and people getting paid leave and getting away with murder."

US President Donald Trump has been livid over the anthem protest, calling the athletes who chose to participate in them "sons of bitches" and calling for NFL League Commissioner Roger Goodell to mete out punishments. Yesterday, Trump said the Nike campaign sends "a terrible message," but stopped short of criticising Nike as a brand.

"In another way, it is what this country is all about, that you have certain freedoms to do things that other people think you shouldn’t do, but I personally am on a different side of it,” said Trump to the Daily Caller on Tuesday. It was an unusual statement for a man who's previously advocated for players to be benched or suspended without pay if they knelt during the anthem. He also pointed out in the interview that Nike pays him "a lot of rent," though the store that's currently housed in a Trump-owned building in New York City announced last year it will be leaving the property.

For Kaepernick, a quarterback without a team, the Nike campaign may represent a chance to reinvent himself.

"He's in a really tricky situation," said Hay. "He's built his brand as a sportsman, but he's not been a sportsman for two years. So he is transitioning into a celebrity which can be monetized... It's inevitable that he will use that fame and that traction with the youth market to launch whichever product and franchise he thinks is suitable- one would assume it'll be an apparel brand, and I think Nike are already launching a Kaepernick specific set of sneakers."