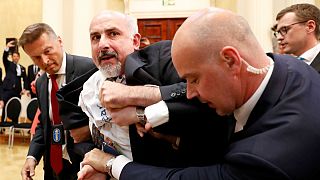 There was a brief disruption ahead of the already tense Trump-Putin news conference in Helsinki on Monday after a man, carrying a hand-written sign was forcibly removed from the talk.

Journalists at the conference were quick to record the incident and said officials had asked him to leave the room earlier, and he had left peacefully.

But the man, who identified himself as a US journalist from The Nation, re-entered with a hand-written sign before he was forcibly removed.