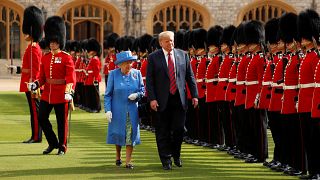 Donald Trump meets the Queen for the first time in Windsor

Alongside his wife Melania, the US President greeted Queen Elizabeth II at Windsor Castle on Friday as part of his two-day working visit to the UK.

Trump received the Guard of Honour to the sound of the US national anthem, before watching the scarlet-clad troops march around the Quadrangle.

The 72-year-old was then invited inside the royal residence to have tea with Britain's longest-reigning monarch.

Later on Friday, the President and his wife flew to Scotland where they will spend their weekend at Trump's Turnberry golf resort.