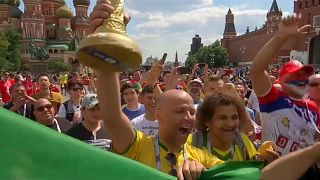 Brazil and Serbia fans optimistic ahead of match

Brazil fans were confident on Wednesday (June 27) that their team could finally show their true colours and beat Serbia to qualify for the next stage of the World Cup.

Brazil has so far seemed to be suffering under the pressure on the team, with the players on the pitch putting in a far less colourful performance than the fans at the Red Square.