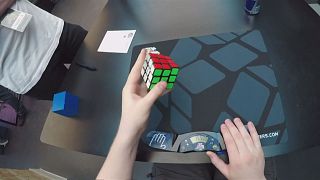 Solving a Rubik's Cube is something many people have tried — and failed — but for the contestants hoping to make the world championships there's no doubt they're masters. But who is the quickest?

Erno Rubik, the man who invented the Cube, was also at the event celebrating with the winners and explaining how "the Cube is language-less."

The world championships are set to take place in the US in September with a 30,000 USD prize pot.