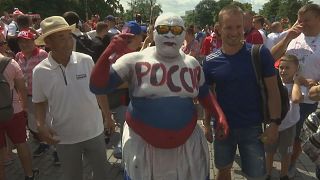 Polish and Senegalese soccer fans did some sightseeing in Moscow's Red Square on Tuesday (June 19), ahead of their teams' showdown.

Senegal reached the 2002 quarter-finals and stunned defending champions France 1-0 in their opening game. With star forward Sadio Mane, the fans are confident that they can steal a win from the side of Robert Lewandowski.

Polish fans say the Bundesliga striker will be enough to bring them to victory.

No African team has bettered Senegal's 2002 achievement. Cameroon, in 1990, and Ghana in 2010 also reached the quarters.