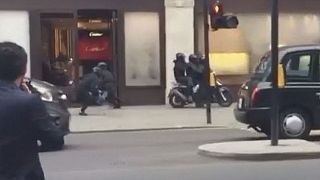 One man was arrested following a robbery at a jewellery shop in central London on Tuesday, the British capital's Metropolitan Police said.

Officers responded to reports that suspects on scooters armed with knives and hammers entered the shop on Regent Street and stole several items, police said in an online statement.

An amateur video taken by a passerby shows the suspected robbers running out of the entrance of the shop and jumping onto scooters or being chased by members of the public.