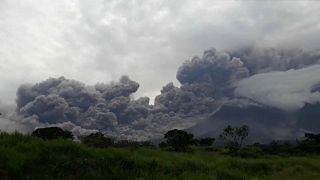 A volcano southwest of Guatemala's capital has erupted for the second time this year, setting off loud explosions and spewing ash nearly six kilometres into the sky.

The National Coordinator for Disaster Reduction in Guatemala said Sunday that fiery clouds of smoke were billowing from the Volcan del Fuego and that soot blanketed cars and houses in the nearby villages of San Pedro Yepocapa and Sangre de Cristo.

Volcan del Fuego is one of the most active volcanoes in Central America.