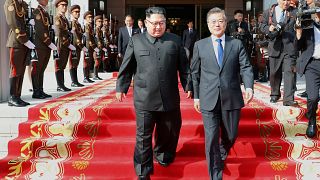 The surprise meeting was called to prepare a planned summit with U.S. President Donald Trump in June.