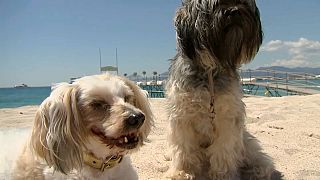 It's not just the prestigious prize of the Palme D'or that brings excitement at the Cannes Film Festival but the Palm Dog!

It's an award for the best performance of a four legged pooch in a movie.

A Chihuahua from an Italian film 'Dogman' won this year's prize.

Producer Jeremy Thomas was on hand to accept it with a look-a-like four legged friend.

Cannes has hosted the barking trophy since 2001.

It's described as 'the world's best-known accolade for doggy's on screen.'