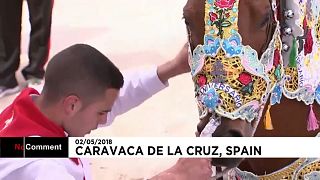 Every May 2, the citizens of the small Spanish town of Caravaca de la Cruz commemorate the 13th Century tradition of the running of the "wine horses."

It is a mad-dash run up the slope adjoining the town's castle with a team of four runners holding on to their team's horse as they make the ascent.

The four horse handlers running alongside the horse and through the hundreds of tightly-packed spectators must all make it to the finishing line still holding onto the horse.

The legend states that the celebration of running of the wine horses dates back to the 13th century, when the castle of Calatrava was under siege by Moorish troops. Locals bravely ran their horses through enemy lines carrying wine, as the local water supply had been poisoned.

The festival has applied for international recognition from UNESCO.