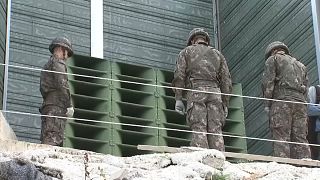 The leaders of the rival Koreas agreed at a historic summit last week on a set of reconciliation steps, including the suspension of propaganda broadcasts and other hostile acts along their tense border.

Seoul's Defence Ministry says it began disassembling front-line loudspeakers Tuesday before pulling them away from the border.