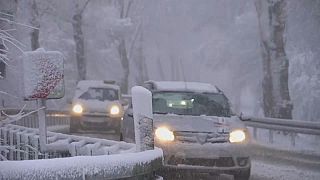 Easter is just around the corner, but winter is making a late return to northern Germany, bringing snow and freezing temperatures.

Easter is just around the corner, but winter is making a late return to northern Germany, bringing snow and freezing temperatures.

Heavy snowfall fell overnight on the island of Ruegen which was also battered by strong winds.

Traffic in the area was hampered by falling snow with reports of several road accidents, closures and traffic jams.

Parts of Poland were also under a blanket of snow despite spring having officially begun.

Weather warnings were issued by the National Institute of Meteorology and Water Management for eight out of 16 Polish provinces.

The snowfall produced a number of surreal scenes including a snow-covered beach in Miedzyzdroje, on the Baltic Sea.

The weather conditions have put pressure on the country's roads ahead of the Easter holidays, when many people are expected to be driving across Poland to visit relatives.