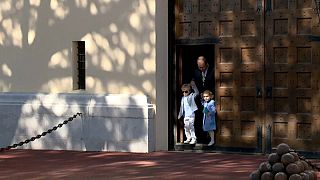 Prince Albert II of Monaco received a surprise on his 60th birthday. He was presented with an ice sculpture spelling out 'Happy Birthday'  in large letters.

Apart from this one public appearance, Prince Albert celebrated his birthday at home with his wife, Charlene and their three-year-old twins, Princess Gabriella and Prince Jacques.

Although there were no large-scale celebrations, his birthday was marked in a few ways across Monaco.

There was with a multi-sensory musical show at the Cathedral of Monaco.

Five tableaux representing the elements - Earth, Fire, Wind, Water and the Celestial - were projected on the interior of the Cathedral centred on the magnificent organ, with music provided by a variety of musicians.