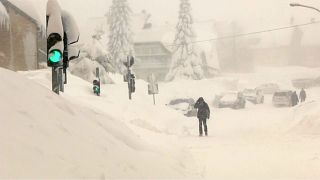 The western Croatian town of Delnice saw 182 cm of snow blanketing the area and temperatures hit a low of -20 degrees Celsius.

As snowploughs struggled to clear the streets, residents of Delnice said they expected more to come.

Boats in the Bakar Bay marina on the Adriatic coast were covered with a thick layer of ice after sleet froze in sub-zero temperatures. Some sunk under the heavy weight of ice.