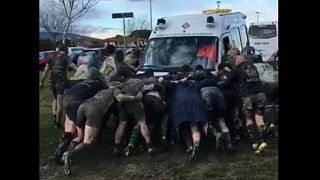 This is the impressive moment two rugby teams formed a ‘scrum’ to free an ambulance stuck in mud in Italy, report local media.

A tractor had already tried in vain to free the emergency vehicle, which was carrying an injured rugby player, according to newspaper Il Tirreno.

After taking the player to hospital, the ambulance staff returned to the site to offer their helpers a beer.

The incident happened on Sunday (February 18) at Pontedera near Florence.