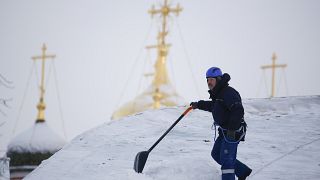 Record snowfall has hit Moscow, downing thousands of trees and covering the Russian capital in almost half a metre of snow in less than 24 hours. Russia's Meteorological Office said on Monday (February 5) that more than a month's average of snow fell over the weekend. It's the heaviest amount of snow logged since weather records began.

The downpour caused massive transportation delays, with dozens of flights delayed at Moscow airports. Moscow roads on Monday morning were congested but the city did not see a complete gridlock as many had feared.

Reports say that more than 2,000 trees were brought down. A falling tree and collapsing power line killed one person and injured five others.

In a city where school is rarely ever cancelled, Moscow Mayor Sergei Sobyanin said parents are not expected to take children to school on Monday.

Snow ploughs have been working in the city all weekend, clearing a record 1.2 million cubic metres of snow from the streets, Deputy Mayor Pyotr Biryukov told Russian news agencies.

He hailed utility workers for allowing Moscow to function as normal.

Outside Moscow, the snowfall was so heavy that local authorities asked the army to send in troops and trucks to help with the clear up, the Defense Ministry said on Monday.