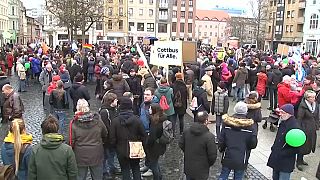 Arab refugees and Germans carrying pro-immigrant and anti-fascism placards marched in Cottbus on Saturday to denounce what they say are attempts by far-right groups to stoke tension in the eastern city after two knife attacks by Syrian teenagers.

Police beefed up security in the city of 100,000 near the Polish border, where the anti-immigrant Alternative for Germany (AfD) beat Chancellor Angela Merkel’s conservatives in an election last year by appealing to voters angry with her decision in 2015 to welcome more than a million asylum seekers.

Last month, two Syrian teenagers injured a 16-year-old German boy with a knife and a group of three Syrians aged under 17 threatened a German couple with a knife outside a mall in Cottbus.