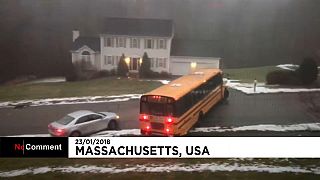 An eyewitness filmed the dramatic moment when a school bus skidded down an icy hill in Massachusetts and crashed into an oncoming car.

Cheryl Kearney Katz filmed the incident from her home in Sutton. 29 children were on board the bus at the time of the crash.

Police later confirmed that nobody was injured in the incident.