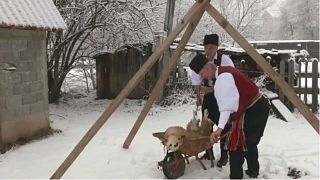 Orthodox Christians in Bosnia have been preparing for Epiphany and Christmas celebrations this weekend by following traditional rituals and enjoying a pre-festive feast.

Preparations for the celebrations include spraying stables and land with wheat seeds, symbolising hope for wealth and fertile land in the coming year.

As the wheat is thrown,  the oldest members of the family sacrifice an animal, which will be then eaten on Orthodox Christian's Christmas Day on Sunday.

Preparations also included paying respects to a Christmas tree before cutting it down for the celebration, and pushing coins into apples to symbolise wealth over the past year.