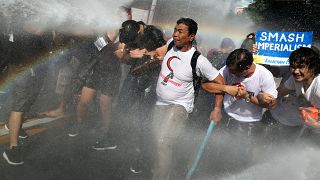 Hundreds of protesters clashed with riot police in Manila on Sunday, (November 12), to protest against the arrival of U.S. President Donald Trump to the Philippines for a regional summit.

Carrying placards declaring “Dump Trump” and “Down with U.S. Imperialism”, the left-wing protesters were blocked by police in riot gear with shields and batons from reaching the U.S. embassy, and then showered with jets of water from a fire engine.

The Philippines is the final leg of Trump’s five-country Asia trip where he will meet Southeast Asian leaders and leaders from East Asia Summit countries, like China, Japan, South Korea, and Australia in a two-day meeting.

Prior to his arrival in Philippines, Trump said he was prepared to mediate in the dispute over the South China Sea, where four ASEAN countries and Taiwan contest China’s sweeping claims to the busy waterway.