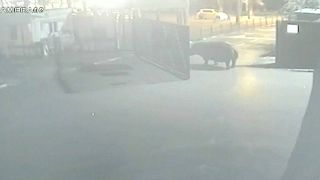 Hippo tastes life outside and decides to return to zoo

A female hippopotamus attempted to escape Israel’s central safari zoo on Wednesday evening (November 1), but apparently had a change of heart as she returned home shortly after.

The hippo was recorded by a security camera as she left the zoo through one of the main gates, to the astonishment of a local guard.

Then, after a short while, she was seen returning slowly and hesitantly into the park in the central Israeli city of Ramat Gan.

Zoo keeper Mor Kaduri-Porat said the hippo tasted the grass outside her usual living area before returning to the safari.

Three years ago three female rhinos also managed to flee the safari zoo after one of the security guards fell asleep.