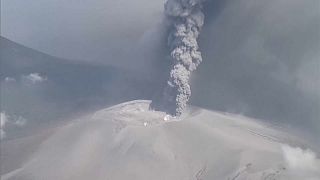 Updated: 12/10/2017
<p>A volcano in southwestern Japan that had been dormant for six years began erupting on Wednesday, spewing ash over farms, towns and cities.</p> <p>The Meteorological Agency says larger eruptions are possible and is warning people nearby in Kagoshima and Miyazaki prefectures to be aware of falling ash.</p> <p>Schoolchildren have been equipped with gas masks to go to and from school.</p> <p>There’s also a warning of possible lava flows within about two kilometres of the crater.</p>
no comment