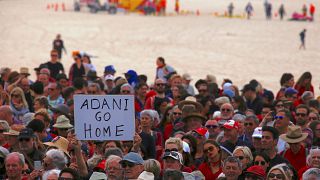 Australians protest against Adani mine

Large protests were held across Australia on Saturday against Indian mining giant Adani Enterprises’ proposed Carmichael coal mine, which would be the country’s largest coal mine but has been delayed for years over environmental and financing issues.

Environment groups say the mine in Queensland state would contribute to global warming and damage the Great Barrier Reef.

Analysts have raised doubts about whether Adani can fund the mine, at an initial cost of $4 billion, given a global backlash to investment in fossil fuels.