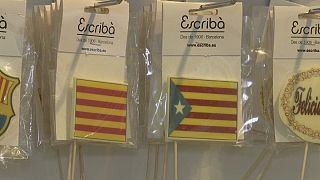 A patisserie in Barcelona is showing its support to regional police chief officer Josep Lluis Trapero by adorning chocolates with his image in the style of ‘Superman’ with a flowing cape of the Catalan flag.
Thousands of Trap-Hero chocolates have sold so far, according to Pastisseria Escriba owner, Christian Escriba.
They were initially produced to pay tribute to the Mossos chief in the wake of the attacks on 17 and 18 of September in Barcelona and the nearby town of Cambrils.
Escriba says that events surrounding the October 1 referendum and the role the Mossos played, are now also part of the tribute.