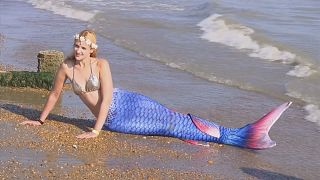 Hundreds of mermaids gathered in the British seaside resort of Bexhill-on-Sea in southern England on Saturday in an attempt to break a bizarre world record.

Donning colourful tails, the participants congregated on the beach in a bid to gather the highest number of mermaids in one location.

Organisers say 325 people took part in the event in Sussex, breaking the previous Guinness World Record which was set in January in the US. That saw around
300 people dress up in Greensboro, North Carolina.