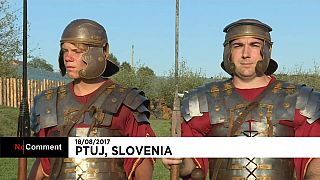 Slovenia’s oldest town Ptuj steps back two millennia to revive its ancient past with the 10th Roman Games. The annual four day festival celebrates the culture, life and traditions of Ancient Rome. Ptuj used to be known as Poetovio and was a military outpost, which grew into an important trade and crafts town.