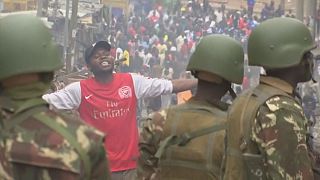 Updated: 12/08/2017
<p>Post-election violence continued across Nairobi on Saturday (August 12), with police firing on protesters and a number of people reported killed.</p> <p>One mortuary official said nine bodies with gunshot wounds had been received at his institute from the capital’s Mathare shantytown, an opposition stronghold.</p> <p>Police on Saturday fired tear gas at protesters in Mathare, many of whom demanded that President Uhuru Kenyatta step down.</p> <p>Several other people were killed in clashes since Friday night, when Kenya’s election commission announced that Kenyatta was the winner in Tuesday’s vote. The opposition says the vote was rigged.</p>
no comment