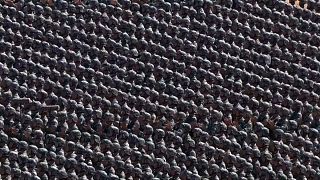 He told the military to transform itself into an elite force, as he oversaw a parade with flybys of advanced jets and a mass rally of troops to mark 90 years since the founding of the People’s Liberation Army.

China’s armed forces, the world’s largest, are in the midst of an ambitious modernisation programme, which includes investment in technology and new equipment such as stealth
fighters and aircraft carriers, as well as cuts to troop numbers.