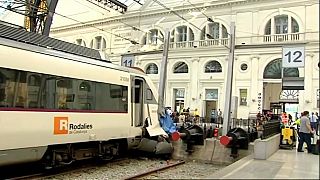 Dozens of people were injured, one seriously, after a commuter train slammed into a buffer stop at Barcelona’s Estació de França station, the second busiest railway station in the Catalan capital.

Several of the injured, including the driver, were taken to hospital, emergency services said, while paramedics treated others on stretchers on the platform.