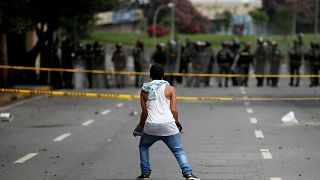 Millions strike in Venezuela against Maduro

A general strike is underway in Venezuela as protesters increase pressure on President Nicolás Maduro to cancel planned elections for a new constituent assembly.

At least three people have been killed in the clashes and at least 300 others have been arrested.

Millions of Venezuelans are reported to be taking part in the strike and several governments, including the US, EU, Colombia, France and Spain have asked President Maduro to cancel the vote, scheduled for 30 July.

But Mr Maduro has insisted he will go ahead with the election.

Almost 100 people have died across the country since protests began in April.