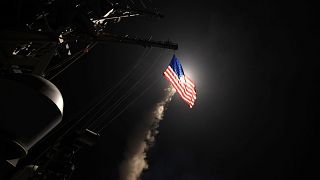 The US military launched 59 Tomahawk missiles from two US Navy destroyers on Friday.

They were aimed at a Syrian airfield and targets included aircraft and air defence systems, a Pentagon spokesman said.

Military officials said two US warships, the USS Ross and the USS Porter in the eastern Mediterranean Sea, fired the missiles at a single target – Al-Sharyat in Homs Province in western Syria.

That is the airfield from which the United States believes the government of Syrian President Bashar Al-Assad launched a poison gas attack that killed dozens of civilians earlier this week.