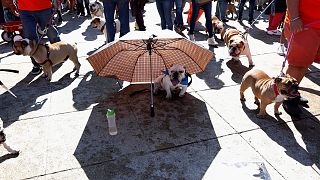 English bulldogs ruled the day in Mexico City as a gathering of almost 1,000 of the hefty canines had Mexico convinced they had set the record for the biggest Bulldog walk.

Event organizer, Erick Hernandez, said 951 keen canines from all over the country came together. He added that such a large gathering of this specific breed has never been seen before.

“We had more than 951 attendees here at the Monument of the Revolution with their dogs. The requirement for the Guinness Record was that they are English Bulldogs, older than one year, and that’s what we did,” he said.

Bulldog owners cooed and fussed over their pets, rubbing them down with water and holding umbrellas over them to protect their delicate skin from the sun.

“Incredible. It’s an incredible breed. It’s a very affectionate breed. A lot of people think they are aggressive but the truth is that it is a very noble and tender breed,” said owner Ana Belen Noriega.

Data from the event will be sent to the Guinness organization for official certification of the record.

According to authorities, some 2,000 people also attended the event.