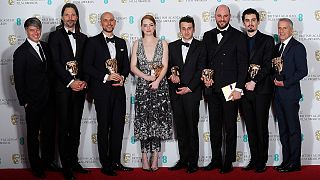 BAFTA stars show off their trophies

The top winners of the 2017 British Academy Film Awards turned up to the official party at London’s Grosvenor House with their shiny, new trophies late on Sunday night (February 12).

“La La Land” director, Damien Chazelle, and lead actress, Emma Stone, showed off their awards, along with Dev Patel and Luke Davies of “Lion” and Casey Affleck and Kenneth Lonergan of “Manchester by the Sea”.

Veteran comedian Mel Brooks, who was honoured with the Bafta Fellowship, joked about his collection of statuettes.