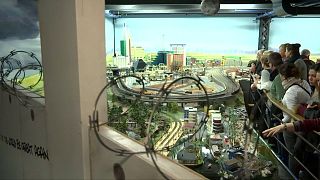 Trump gets his wall

A tourist attraction in Hamburg, Germany that features miniature models of various parts of the world has put up a wall around the United States, in a dig at President Donald Trump’s plan to build a full-sized one on the border with Mexico.

The display at ‘Miniature Wonderland’ is a hit with tourists, including some from the United States, who are usually drawn by its vast model railway.