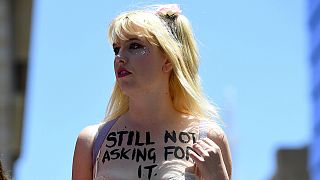 Thousands of protesters in Sydney on Saturday (January 21) joined the first of hundreds of womens’ marches organised around the world in a show of disapproval of U.S. President Donald Trump as he began his first day in office.

Some 673 “sister marches” are planned worldwide for Saturday, in addition to a protest in Washington D.C., according to the organisers’ website which says more than two million marchers are expected.