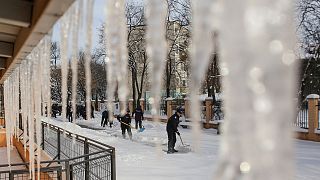 A second wave of blizzards in Romania has closed more than 130 roads and caused huge delays and cancellations on the railways.

Thousands of commuters rode the Bucharest underground on Wednesday, while others walked on the streets as snow piled high on the pavements.

Schools were closed in the worst-affected areas of Romania.