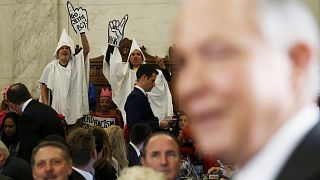 US lawmakers heckled by protesters adorned in KKK outfits

Updated: 11/01/2017
<p>Protesters dressed in Klu Klux Klan robes heckled US lawmakers on Tuesday (January 10) at the start of the Senate Judiciary Committee’s confirmation hearing for Senator Jeff Sessions to become the next US Attorney General.</p> <p>A total of seven confirmation hearings for President-elect Donald Trump’s cabinet are expected this week, starting with hearings for Sessions and another for retired General John Kelly, Trump’s choice for secretary of homeland security.</p>
no comment