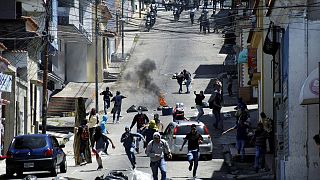 Updated: 26/10/2016
<p>Masked youths burned rubbish and set up roadblocks in a volatile Venezuelan border city, witnesses said, in the latest protest over the suspension of a referendum drive to remove socialist President Nicolas Maduro.</p> <p>Several hundred students held demonstrations in San Cristobal, near the frontier with Colombia. The city, a hotbed of anti-Maduro sentiment, was the site of the worst violence during protests two years ago that led to 43 deaths across the nation.</p>
no comment