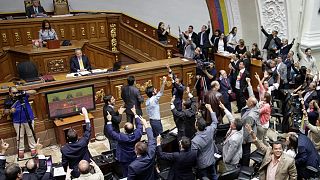 The session was briefly interrupted when around 100 apparently pro-government protesters stormed in, brandishing Socialist Party signs and shouting “The Assembly will fall!” before officials herded them out.
At least one assembly worker was injured, sporting visible bruises to his head. The opposition also said there were reports of theft.