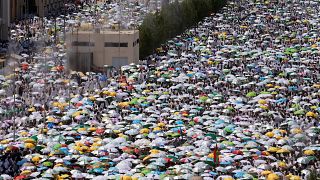 Thousands of Muslims carried out the “stoning of the devil” ritual on Monday (September 12) to mark the beginning of Eid al-Adha celebrations which is the end of the annual haj season.

Pilgrims threw stones at three walls at Jamarat in Mina, in one of the main rites of the haj.

Saudi authorities have stepped up security measures to avoid a repeat of last year’s crush, the worst disaster to strike the annual pilgrimage for at least 25 years, in which two large groups of pilgrims arrived together at a crossroads in Mina on their way to performing the stoning ritual.