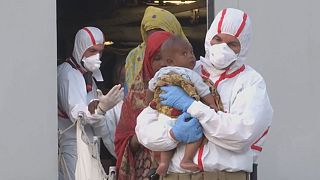 Italy: migrants arrive at the ports of Cagliari and Messina

A Norwegian ship arrives at the Italian port of Cagliari, carrying 1,100 rescued migrants.

About 1,200 people arrived in the Sicilian port of Messina after being rescued off the Libyan coast. Among them were numerous children and unaccompanied minors.

The Italian Coast Guard says a total of 10,000 people were rescued in just two days between August 29 and 30. Italian Navy ship Virginio Fasan brought the first group of migrants to Sicily. Most were from Sub-Saharan Africa. The remaining people will be taken to different Italian harbours in the coming days.