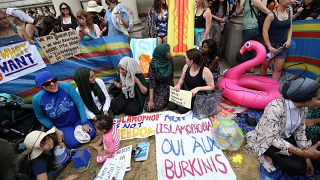 Dozens of women, Muslim and non-Muslim, held a beach party outside the French embassy in London on Thursday (August 25) to protest against the ‘burkini ban’ being enforced on some French beaches. It was organised on Facebook
by two friends after a photograph emerged of armed municipal police officers apparently forcing a woman on a beach to take off her burkini.